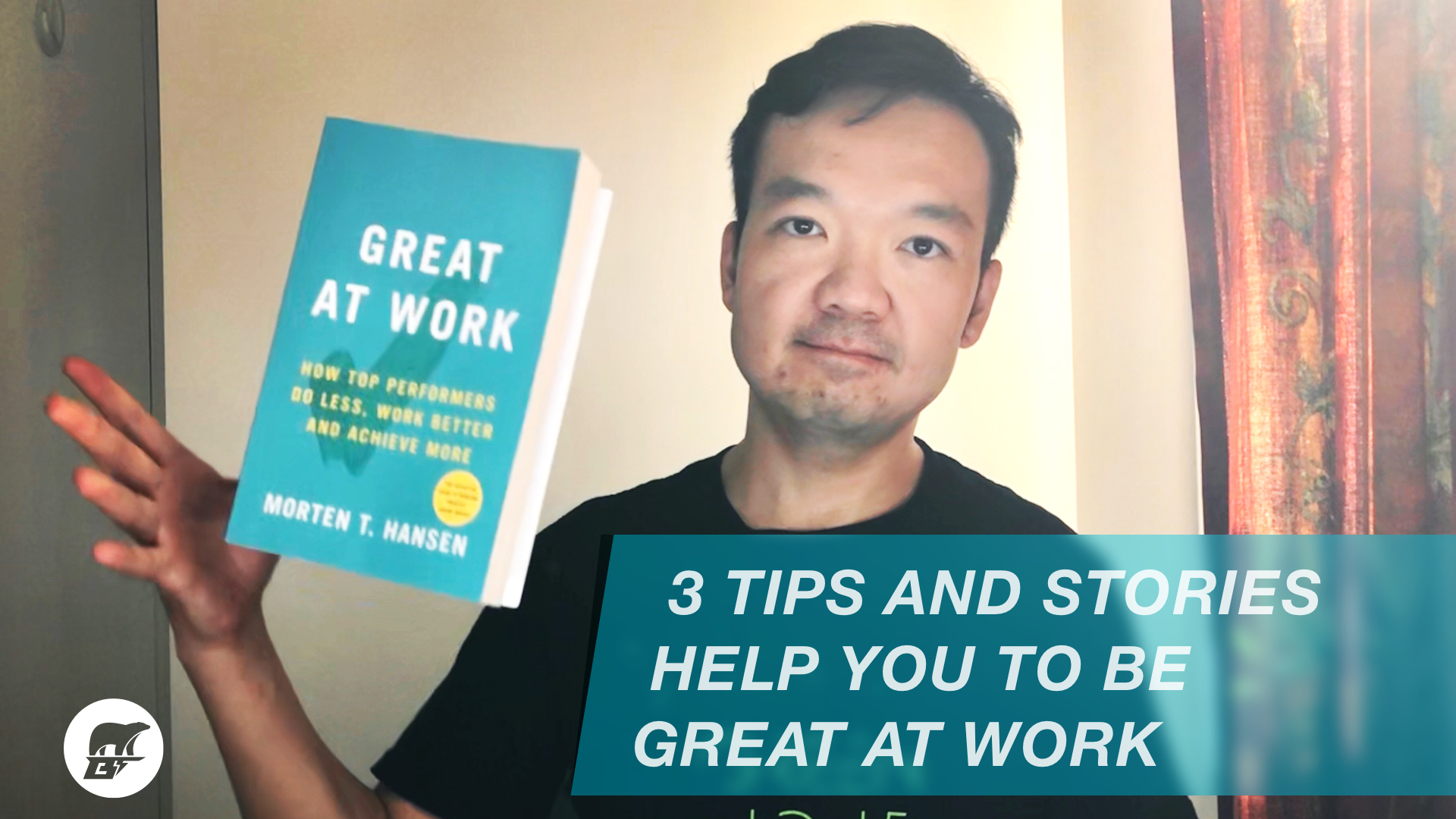 Why do some people perform better at work than others? It's a simple question, but to answer that, you might need a five-year research of 5,000 employees and managers. Or you can read this book: Great at Work by Morten Hansen. In this book, the Wall-Street Journal best seller Morten Hansen reveals the answer can be applied by anyone looking to maximize their time and performance. He did a grandbreaking 5 year's research, and got his “Seven Work Smarter Practices”.

This book is a gift from my boss. He bought hundreds of copies for all employees. Why? After reading this book, I found the answer. Let's check it out!

Do less, then obsess it.

Let's start with a story. In October 1911, two teams were racing to be the first humans to reach the South Pole, the last major place on earth not yet discovered. The first team was led by Robert Scott, Royal British Navy Commander, the second team was led by Norwegian Roald Amundsen. They knew of the other's presence, and after the well preparation, the race began. I don't need to spend too much time to describe the journey, it was hard, really hard. Scott and his men, exhausted and finally arrived the South Pole, miserably found the Norwegian flat whipping in the wind. Amundsen arrived 34 days ago, and was the first humans arrived. Scott's team not only lost the race, but also lost their lives. On the way back home, a storm pinned them down in their tents. There they would die, only 11 miles from the next depot of food and shelter.

One leader and his team achieved the extraordinary, while the other team perished, and Scott's team was even bigger and better equipped than Amundsen's team. Why? In this book, Morten reveals the answer: Amundsen's team was the one with the narrow scope. Scott's team had 3 times the men and twice the budget. He used five forms of transportation: dogs, motor sledges, Siberian ponies, skis, and man-hauling. If one fails, he had backups. Amundsen relied on only one form of transportation: dogs. Why did the one without backups not fail, but the other one failed? It was not just because of dogs, Scott had dogs too. But Amundsen really concentrated on dogs. He spent 2 winters with Inuits to learn how to master dog sledging. Also, his research suggested that Greenlander dogs perform polar travel better than Siberian huskies. Then he traveled to Copenhagen to sought out expert dog runners to join his team, several more skilled than he. He picked the best dog runners, best dog for the journey.

Scott, on the other hand, was so busy arranging for five separate transportation methods that he couldn't focus on any of them. Once moving on the ice, he struggle to coordinate his convoy. Long story short, Amundsen's team was traveled 15 miles per day, and Scott's team, 11 miles. Amundsen had chosen one method and mastered it, he had done less, then obsessed.

This story tells us the first rule of being great at work: do less, then obsess it. "Focus" means 2 activities at work: choosing a few priorities, and then dedicating your efforts toward excelling at them.

For me, I always spread myself too thin. It's ok for my hobby, but not good at work. When I'm doing more, often I execute poorly and can't allocate enough attention, just as Captain Scott. I found there're two things that lead me to the "doing more" trap: I always say 'yes' to other people, and I might lost myself in distraction and temptation.

What're the actions? I have 2: Learn to say 'no' to other people, and use some tools such as Kanban, tomato clock to tie myself to the mast.

I'm a designer, and for me design is a daily job, 24/7. Design is not mean that you sitting in front of a desk for a few hours, and get some impressive graphics or fancy animations. You can design your lifestyle, your diet, your way of conversation, your work process, or the way you use your phone. And you can redesign your work as well. When redesign your work, focus on one thing: value. A good redesign delivers more value for the same amount of work done. But, what is value? In this book, Morten defined the value of work by measuring how much other benefit from it. So he has uncommon opinion: "start with goals" when planning an effort is wrong. We need to start with Value, then proceed to goals. He even has a equation:

Here's an example: as a UX designer, I do user interviews with our customers regularly. After each interview, I'll share the study and findings with my team, it helps them to understand the customer better, and so that we can improve the product for the customer's need. If I can redesign my work process to improve these 2 factors, I can improve the quality and efficiency of this regular user interview to create more value. But how?

I used to take notes with notebook while user interviewing, and recorded audio for the interview. After that I would listen to the audio recording, and add more notes. It means for a 1-hour interview, I will take another 1.5 hour for note taking, and half an hour to input the notes to the doc, then created the report by those data. How to redesign my work process to improve it? After a few testing and practice, now I just taking note with the tool I use for creating report while interviewing customers. I type on my laptop, captured the key information during the interview, and then add more details on the notes after the interview so anyone doesn't attend the interview can understand the findings. By redesign my way of taking note, I can finish the user interview and create the report with only half of my previous time. I improved the efficiency, so as the value.

So, it's your turn. How about your work? Are there anything you can think of to redesign at work, to create more value? I'm sure there must be some. Think about it, find them out, and redesign!

What's the one thing in common in all different companies? Meetings, meetings and more meetings. Even during the COVID-19 quarantine, video meetings are a big part of working from home schedule. We all have experience of attending some group meetings, which don't solve problems, but only waste of lots people's time, some times there're even many intelligence in the room. Normally, the problem of those meetings is lack of critical thinking and thorough debate about the plan, its assumptions, and its weaknesses. We don't need teams to conduct a vast number of meetings to get their work done, actually it will never happen. Rather, we need smarter team meetings where people debate rigorously and commit to decisions. That's the Fight and Unite principle.

When teams have a good fight in their meetings, team members debate the issues, consider alternatives, challenge one another, listen to minority views, scrutinize assumptions, and enable every participant to speak up without fear of retribution. In one short sentence, "We need encourage 'constructive conflict'". But how to do that, especially from individual's perspective?

Morten gave us a few tips about meetings, and I agree each one of them:

I think the leader of a team should focus on making people feel it is safe to speak up in the meetings, make fair for everyone. Everyone in the team need to show their opinions transparent in meetings, then commit.

For me, I'm a good uniter, but was not a good fighter. I used to choose not speaking or asking question at meetings, just because I don't want other people think I'm stupid to ask some silly questions. And also the mindset of my English is not good enough as second language blocked me from asking questions or showing disagreements. Then I realised I was wrong about 2 things:

Right, this is the fight and unite principle, another essential thing we need if we want to be great at work. How are you doing on this one? Are you able to debate in team meetings and then commit to decisions?

Alright, this is the 3 major things I would like to talk about the book, Great at Work by Morten Hansen. There're more principles and tips in the book, if you are interested in improving your performance at work, find the book and read it.

One more tip: the improvement is a continuous journey. You can't just read a book on a weekend, and become a totally new person on Monday. That's a Hollywood movie. But, you do can improve yourself step by step. If you always get stressful to talk in the meetings, try to ask yourself to speak at least 1 minute in the next meeting. If you feel like you are doing too many things, just pick one thing from your calendar tomorrow and remove it. Do it step by step, but continuously.

Thanks for watching, and hope you like this one. If you do, please share it with your friends or colleagues. Also if you haven't subscribe my YouTube channel BearTalk, now it's a good time. Smash the subscribe button below and you won't miss the next video. Right, have a great day/evening and see you next time!